THE ARCHITECTURE
OF STORY

The Dramatic Writer’s Companion is now available in a Second Edition (2017). Sporting a new cover, this updated version of the guide features helpful cross-references to related topics in Character, Scene, and Story, a sequel that offers over 40 additional tools to help dramatic writers more fully develop their scripts.

Having spent decades working with dramatists to refine and expand their plays and screenplays, Dunne effortlessly blends condensed dramatic theory with specific action steps—over sixty workshop-tested exercises that can be adapted to virtually any individual writing process and dramatic script. Dunne’s in-depth method is both instinctual and intellectual, allowing writers to discover new actions for their characters and new directions for their stories.

Dunne’s own experience is a crucial element of this guide. His plays have been selected by the Eugene O’Neill Theatre Center for three U.S. National Playwrights Conferences and have earned numerous honors, including a Charles MacArthur Fellowship, four Bay Area Theatre Critics Circle Awards, and two Drama-Logue Playwriting Awards. He is currently a Resident Playwright at Chicago Dramatists where he develops plays and teaches workshops. Dunne also has led over sixteen hundred workshops through his San Francisco program, served as a dramaturg at the O’Neill, and twice attended the Australian National Playwrights Conference as guest instructor. Thousands of individuals have already benefited from his workshops, and The Dramatic Writer’s Companion promises to bring his remarkable creative method to an even wider audience. 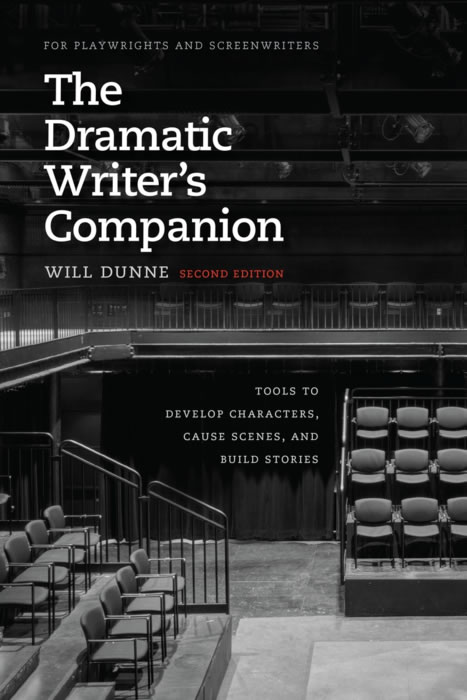 The University of Chicago Press published The Dramatic Writer’s Companion in April 2009 (352 pages, 6 X 9 © 2009). Series: Chicago Guides to Writing, Editing, and Publishing. The guide is available in hardcover, paperback, and electronic versions. Click here to order your copy directly from the publisher.

“In his new handbook for writers, Dunne adheres to the idea that character development is essential to telling a story. . . . Dunne employs his wealth of experience as the current resident playwright at Chicago Dramatists, a Charles MacArthur Fellowship honoree, a former O’Neill Theatre Center dramaturg and an award-winning author of such plays as How I Became an Interesting Person, Love and Drowning, and Hotel Desperado to give writers a blueprint on how to examine their ideas in depth in order to develop their plays and screenplays.”
—July Samelson
Shelf Life,” Playbill.com
“Will Dunne meets the writer on his or her own terms, eye to eye. Unique, ambitious, and comprehensive, The Dramatic Writer’s Companion contains practical writing exercises underscored by well-developed dramatic theory.”
—Art Borreca
Head of the Playwrights Workshop and Dramaturgy Program,
University of Iowa
“A breath of fresh air. Whether you’re working on your first play or your fortieth, preparing a first draft or polishing up a finished piece, The Dramatic Writer’s Companion offers challenging, thought-provoking exercises rather than formulaic ‘how-to’ solutions. This is the kind of book that not only makes plays stronger; it makes writers stronger as well.”
—Jeni Mahoney
Playwriting program head, Playwrights Horizons Theater School
“Will Dunne lays out all the right questions with great precision and elegance. In the process he coolly demystifies all the dramaturgical demons; they become nothing more than the routine technical challenges faced by any craftsman.”
—Dennis J. Reardon
Professor emeritus of playwriting, Indiana University
“The practical genius of Will Dunne’s writing lessons proved invaluable to me in the development of the script for my own film Mean Creek. I have read many books on scriptwriting, most a bunch of intellectual blather about themes and structure, whereas Will’s approach to writing is grounded in specific and useful exercises that a writer can actually employ at the moment of creation.”
—Jacob Estes
Recipient of the John Cassavetes Award, Film Independent’s
20th Spirit Awards, for his film Mean Creek
“This book triggers two keywords in me: ‘provoke’ and ‘inspire’. No one can teach anyone to become a dramatic writer. But it is possible to learn how to improve your writing skills. It is possible to be provoked into thinking differently, into adding different colours and dimensions to your ideas, to extend the range of images in your head, to startle your imagination; in short, to be inspired into trying new approaches and methods. This book has the potential to do all of that for a writer.”
—May-Brit Akerholt
Former Artistic Director, Australian National Playwrights Conference
“Will Dunne has taken everything he knows from the powerful dual standpoints of an award winning playwright and a master teacher of produced playwrights to create the book we’ve been waiting for…it’s all there, from every angle and every perspective, how to bring fascinating, fully developed characters in conflict into the light and onto the stage.”
—Susan Stauter
Artistic Director, San Francisco Unified School District

In addition to the same character, scene, and story exercises that thousands of writers have used since 2009 to write and revise their scripts, the new edition of The Dramatic Writer’s Companion features all new cross-references throughout the guide to related tools in Will Dunne’s Character, Scene, and Story.

When The University of Chicago Press asked industry experts to review The Dramatic Writer’s Companion, May-Brit Akerholt, who served as Artistic Director of the Australian National Playwrights Conference for ten years, wrote this detailed report summing up her analysis:

I was delighted to read Will Dunne’s The Dramatic Writer’s Companion. It is obvious from the beginning that this book is written by someone who is a both a playwright and a teacher. Will Dunne mixes an artist’s imagination and intuition with a teacher’s knowledge of the craft of dramatic writing. It is an irresistible combination, producing a book which is simultaneously astute and imaginative.

This book is not concentrating on the idea of story, or how to tell a story, the way most playwriting manuals do. It establishes early that character is “the heart and soul of story.” By focusing on character and action, and the effects of character on action and action on character, the book lays open the many ways a story is built from the complex relationship between character and action.

Dunne also deals with the use of imagery in the building of a story. His ideas on how to exploit images so they become part of creating a through-line are not only extremely useful, but presents a whole new way of seeing an action, an event, in terms of both image and character.

I was fascinated by the imaginative, even entertaining way Dunne presents his ideas. For instance, there is a sub-heading called “How Your Characters’ Voices Compare and Contrast,” which deals with the old adage that when you read a play, you should be able to hold your hand over a character’s name and still know who is speaking. However, this book suggests that you “translate” ten generic statements into the voices of two different characters. It forces you actively to explore how characters talk, in which ways their voices are unique. As the book points out, it is vital to find the distinctness of each character’s voice as an ongoing part of the character’s development process, and this is a distinctly refreshing way of doing it.

A similar idea is expressed in the section called “Building Your Story” where Dunne deals with the problems of choosing a protagonist. Using Hamlet as an example, he suggests that making it one character’s story involves the process of creating a voice for that character, thus beautifully linking, even tying together, different parts of the book.

For me, language is of prime interest: text and subtext, not only what the characters say, but how they say it, and most importantly, what they don’t say. The section “Unspeakable Truths” suggests that this is a critical part of what happens between characters, that what is commonly called “subtext” is a “rich source of dramatic action because they are powerful motivators of what the characters do here and now” [my emphasis]. Dunne suggests how, on a wider level, characters have objectives, and then details ways to explore and deepen these objectives and make them part of characterisation.

Another chapter extends the argument about objectives by discussing how to understand a character by knowing what he or she wants in each scene. The book suggests how to link what your character wants most in life to what the story itself is about, and to use this in each tiny beat of language and action.

“Over-writing” is one of the most common sins in playwriting. In an extremely useful section, “The Bones of the Lines”, Dunne deals with how to refine, or edit dialogue, how to get rid of the superfluous and create a dialogue that reverberates, hints, tantalises and avoids becoming explanatory. This should become prescribed reading for all playwrights of all levels of experience.

The book moves from exercises offering a “clear, big-picture view” of the scene you plan to write, to giving your blank page a working context so you can translate a scene onto a visual storyboard, to dealing with minute details such as the effects of sounds and smells – for instance, the effect of the sound of Nora slamming the door on her past life in the final scene of A Doll’s House.

Finally, the book is beautifully structured. Any writer who approaches it will find the “Content” section extremely effective and lucid.

This book triggers two keywords in me: “provoke” and “inspire.” No one can teach anyone to become a dramatic writer. But it is possible to learn how to improve your writing skills. It is possible to be provoked into thinking differently, into adding different colours and dimensions to your ideas, to extend the range of images in your head, to startle your imagination; in short, to be inspired into trying new approaches and methods. This book has the potential to do all of that for a writer.

The self-contained exercises in the guide can be used in any order and repeated at different times to produce different results. To facilitate guide use, exercises are organized into character, scene, and story sections. Each section is further divided into stages 1, 2, and 3 to suggest when an exercise might be best to try, with a stage 1 best suited to early script development and a stage 3, to later development. However, this numbering system is optional. It’s for guide users who prefer some structure in choosing exercises. Following are summaries of the guide exercises:
BACK TO TOP